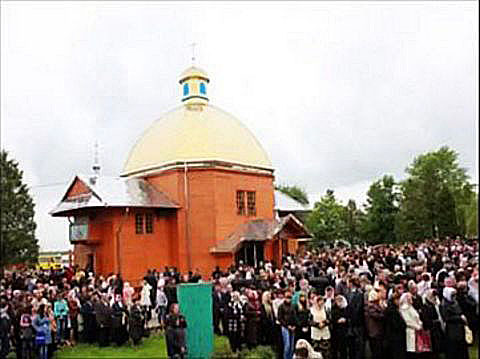 “There will be a war.  Russia will become a godless country.  Ukraine, as a nation, will suffer terribly for eighty years – and will have to live through the world wars, but it will be free afterwards.”

“My children, all of you are dear to me and please my heart.  I make no distinction of race or religion.  You here in Ukraine have received knowledge of the One, True, Apostolic Church.  You have been shown the door to Heaven.  You must follow this path, even though it may be painful.”

“The Eternal God is calling you.  This is why I have been sent to you.  You in Ukraine were the first nation to be entrusted to me.  (The ruler Yaroslav the Wise dedicated Ukraine to the Most Holy Mother of God in the year 1037.) Throughout your long persecution you have not lost faith, hope, or love.  I always pray for you, my dear children, wherever you are.”

Although Our Lady predicted that Ukraine would “suffer terribly for eighty years” before gaining independence, she was extremely close in her prediction!  Ukraine had its declaration of independence ratified in Kiev on August 24, 1991 – some 77 years after Blessed Mary’s prediction in 1914!