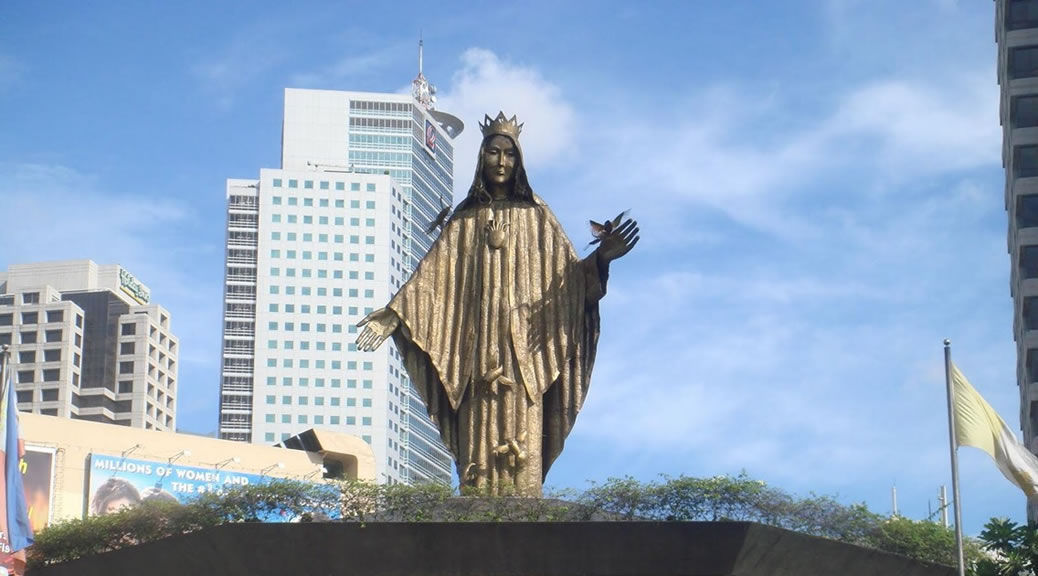 The events in the Philippines began in February, 1986, as the virtual twenty-year dictatorship of Ferdinand Marcos came to an abrupt and unexpected end through a series of strange events. Corazon Aquino, the widow and reluctant political replacement of slain opposition leader, Ninoy Aquino, had won the presidential election in a stunning upset by an overwhelming margin. President Marcos had actually called for this election as a means to put an end to the efforts by the opposition, but it backfired! However, through illegal actions and total control of the media, Marcos, instead, flagrantly lied and declared himself as the winner.

The rigged election results were blatant and obvious to everyone, sending millions into the streets to protest and triggering an unexpected coup attempt by a dissatisfied faction of the military. The saga of EDSA (Epifanio de los Santos Avenue) culminated in a four-day tension-filled event when the rebel group in the Armed Forces of the Philippines was discovered by the Marcos troops and was ordered to be arrested. The Archbishop of Manila, Cardinal Jaime Sin, enjoined the people to go out in the streets to protect the rebel leaders. The Catholic faithful heeded the call and massed along EDSA, fronting Camp Crame where the rebel leaders — headed by then Defense Secretary Juan Ponce Enrile and Armed Forces Vice Chief of Staff Fidel Ramos — were holed and thus escorted by the people against impending bombs from the Marcos loyal troops.

The people milled around the rebel leaders, bringing nothing with them but rosary beads, flowers, food and images of the Blessed Virgin. Hundreds and thousands of religious priests and sisters, parish priests and their parishioners including onlookers and curiosity seekers stayed on the whole of EDSA, immobilizing the tanks sent out to crush the rebel leaders and, according to reports, even the people. The masses of people in the streets continued to pray the Rosary endlessly. Some offered garlands of flowers to the soldiers who stood guard. Some brave nuns climbed up on the tanks that were approaching. Those who stayed in their homes sent supplies of food and drinks to the streets.

President Marcos had sent a full army — with tanks and armored vehicles — to Manila in order to control the seemingly unstoppable public demonstrations against his administration. He planned to stop at nothing in order to gain control – even if that meant massacring the crowds on the streets. The civilians continued their protests, notwithstanding the danger when they would lie down in front of the tanks to stop them from penetrating the crowd.

As the soldiers tried to advance, they saw up in the sky what appeared to be a cross-like figure, but this did not hinder them from pursuing their goal, and they continued to press on toward the crowd. The Rosary was recited continuously; the melody of Ave Maria sounded after each decade.

All of a sudden, the soldiers were awestruck, stopping dead in their tracks. A “beautiful woman encased in immense bright light and dressed as a nun” became clearly visible, standing in front of the tanks. The light was dazzling as the crowds saw her appear. According to these soldiers, a beautiful woman dressed in blue with heavenly eyes appeared in front of them, extended her arms outward and spoke in a voice that was clearly audible to everyone,

“Dear soldiers, stop! Do not proceed. Do not harm my children. I am the queen of this land.”

The soldiers then dropped their weapons, withdrew from pressing forward and joined the throngs of people to turn and fight with them against the Marcos regime.

The soldiers claimed that the woman who appeared to them was the Virgin Mary. A television station was covering the event which prompted thousands of residents of the Philippines to run out of their homes in celebration: “Mother Mary is with us!”

President Marcos and his family left for Hawaii that night.

Cardinal Jaime Sin vouches for the veracity of the apparition and said:

“Yes, my heart was telling me that this was indeed Mary. And since they obeyed this woman who appeared to them – and did not follow orders to fire upon the people, then President Marcos had nobody to give him any power or support. This is when he fled from the Philippines. That was the end of him.”

The Cardinal added that he did not know the soldiers – but that they came in tears to him, awestruck by the “beautiful heavenly lady.” The Cardinal also revealed that he met with Sister Lucia, the only living visionary from Fatima, just before he was to travel to the United States to first tell of the Virgin’s visit at a press conference. Although Sister Lucia had no access to newspapers, radio, television, or magazines, he was amazed that she knew and recounted every detail to him of what had happened. She then added that Corazon Aquino was a gift to the Philippines from God, and that if she could maintain peace and democracy there for at least two or more years, that nation would be influential in leading China to Christianity.

It was on a historic day, February 25, 1986 when the concept of a special shrine dedicated to the Blessed Virgin Mary was conceived. On that date, the political dictatorship of the late President Ferdinand Marcos ended with him, family and close associates fleeing to Hawaii to escape the angry but peaceful uprising of the Filipino people who were tired of his one-man rule.

It was a shining moment for the faith of the people in a God who listens. It was also the people’s faith and trust in the Blessed Virgin Mary, Mother of the Church, which gave the people persistence in patiently waiting for the end of this unlamented regime.

Ten years later, on the same site where the rebels were met by the protective group of political activists to safety, a church was built, aptly named Our Lady of EDSA Shrine, in commemoration of that glorious moment in the history of the Filipino people where love and faith towered over the might of guns and goons and propelled the Republic to continue its political history of freedom and respect for the constitution and the will of the people.

Mary, Queen of Peace, the Patroness of EDSA Shrine, stands guard as a large statue atop the beautifully crafted roof of the EDSA Church, fronting the busy crossroads of EDSA and Ortigas Avenue. It is a fitting place for Our Lady of Peace to look over her children and keep them hopeful of a more joyous and peaceful life now and in the future.