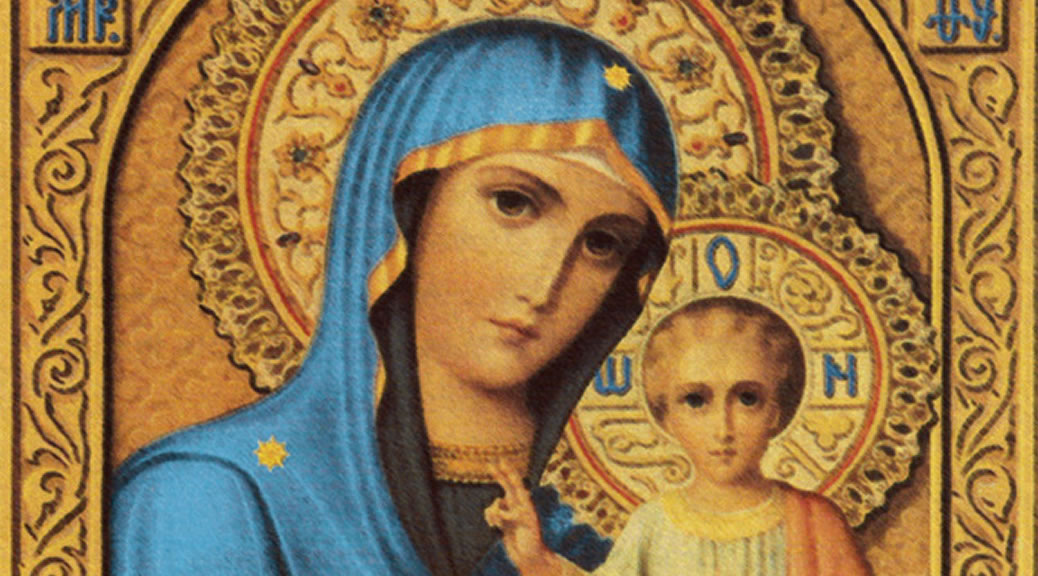 Myrna (Maria) Al Akharas was just 18 years old when she married her husband Nicholas in 1982. In November of that year her sister-in-law, Layla, became quite ill. While praying fervently for her on November 22, 1982, without any warning, her hands began to exude oil. Two other ladies present insisted that she place her hands on Layla, and when she did, Layla was instantly healed. Myrna was totally confused.

Five days later, a small, three-inch tall picture of Mary with the Christ child in their bedroom began oozing enough oil to fill a saucer! Confused, family members were summoned – and they all began praying. Within one hour, four more dishes of oil came from the small icon. Suddenly, Myrna could not hear any sounds around her – as if mysteriously blocked by some presence. Then a most beautiful voice said to her,

“Mary (Myrna), do not be frightened. I am with you. Open the doors and do not deprive anyone from seeing me. Light a candle for me.”

Then she could hear sounds around her again. The icon poured forth oil for the next four days. The clergy and civil authorities all investigated for any evidence of a fraud or trick. They could only conclude that oil was indeed coming from the picture. When they asked Myrna to pray in front of them, having washed her hands well, the oil would flow from her palms again. They were impressed that she was not more religious than most others. She prayed very little, only went to church once a week, and loved to dance, swim, and laugh like other young people.

One day a priest was kneeling near Myrna while she was praying, and he heard her say, “Father, I feel like the Virgin has entered into me!” Then he saw a “brilliant liquid” flowing abundantly from her palms. A bishop who was also present in the room noted that the oil had the scent of myron – or holy oil. Medical doctors and scientists gathered to decipher the origin of the healing oil that continued to exude from Myrna’s hands when she prayed. Thousands of people began to visit the icon in her home. The sick gathered in her courtyard, asking to be anointed with the healing oil. Phenomenal cures resulted for many of them.

On December 15, 1982, at 11:37 p.m., while a huge crowd of people were praying in front of Myrna’s little picture, she felt an invisible being tug at her arm and firmly escort her to the roof garden. She was afraid and knelt on the tile floor. When she looked up, she saw the Virgin Mary in front of her! “She shined as if she were covered with diamonds. I was afraid, and I ran away screaming.” Her husband and family were overwhelmed and confused. What was going on?

On December 18, 1982, Myrna was once again mysteriously escorted by an invisible being to the roof garden. But this time her husband and nine others followed. From the roof Myrna observed something strange across the street in the upper part of a tree.

“There was a large, luminous, white globe – like a large diamond ball – sitting on a tree limb. The ball opened, splitting from the top and dividing into two half-moons. As the halves opened, a bow of light appeared over the top, and inside was the same Beautiful Lady. As the ball disappeared, the Lady seemed to be standing on the branch of the tree. She had a white veil that covered her hair. The veil was a part of her dress. Over her right shoulder was a sky-blue cape that wrapped around her back and over her left side. The white dress covered her feet, and only her hands could be seen. The dress and cape seemed to be made of white and blue light. From her right hand hung a long Rosary.”

The vision floated toward Myrna along a stream of pure light that formed like a path through the sky from the tree. The Virgin passed right through the railing of the terrace, stopping just two feet away from where Myrna knelt. Then Mary spoke,

“My children, be mindful of God because God is with us. You know much, but you really know nothing. Your knowledge is incomplete. One day you will know everything as God knows me. Do good to evil-doers. Do not mistreat anyone. I have given you oil, more than you have asked for. I give you something stronger than oil. Repent and believe! Be mindful of me in your joy. Announce my Son Emmanuel. He who announces Him is saved. He who does not … his faith is in vain. Love one another.”

“I do not ask you to give money to churches. I ask you to love. Those who give money to the poor and to the churches but yet have not love, have lives of no value. I will visit the homes of my children more frequently, because those who go to church do not always go there to pray. I do not ask you to build a church for me but rather a shrine. Give. Do not deprive anyone who asks for help. Be humble, my children. Do not insult the proud. Forgive them. Then you will be forgiven.”

Then Mary raised her right hand (which held the Rosary). A brightness enveloped her as she disappeared into the dazzling light. The Virgin continued to appear to Myrna after this, frequently emphasizing church unity and humility.

On December 19, 1982, a man carried his paralyzed nine-year old son into Myrna’s bedroom where the icon was kept. Oil poured from Myrna’s hands while she and the boy’s father prayed over him. As she anointed his legs, the twisted limbs straightened out, and the boy stated excitedly that he could feel his legs for the first time in his life! The father screamed praises for the miracle, and his son ran and jumped and danced with great joy and many tears.

On December 31, 1982, an official declaration was made by Patriarch Ignatius IV Hazim, who had studied the supernatural events carefully. Recognition was spread throughout the Greek Orthodox churches in Damascus. Approval was granted by the Syrian Catholic Church.

On January 5, 1983, a Muslim woman, who was completely blind, was healed and recovered her eyesight completely. It is estimated that 100,000 people have witnessed these miracle healings from the oil with their own eyes. It is also estimated that over a million people have seen filmed documentation of these miracles. Even in 1988 as she traveled to speak about the apparitions and messages given to her, the healing oil continued to flow and heal others.

On June 18, 1990, the Roman Catholic archbishop of Damascus attested to being an eyewitness on several occasions to oil exuding from Myrna and her little icon.

Myrna has also bore the stigmata on the Fridays preceding Easter. One video clearly shows the bloody outline of an unseen crown of thorns on her forehead. Her hands exhibit gaping wounds in each palm. She is seen in the video, writhing in pain, on her bed. Her husband, mother, and clergy are with her for those three hours.

“My daughter, I am the beginning and the end.”

On October 15, 1986, Myrna received a message for the world from Jesus:

“My daughter, how beautiful is the earth. In this place I shall establish my Kingdom and My peace. I shall give you My Heart in order to have yours. Your sins are forgiven because you are looking for Me. He who looks for Me, I shall imprint My image in him. Tell My children to come for Me, for I am with them at all times.”

Although Myrna has no idea why she was chosen for these spiritual gifts, she treasures them and accepts her “assignment.” She encourages others to take these messages given to her very seriously. It is not known if the oil ever stopped flowing from her palms, so she may be still offering the healing oil to this present day.